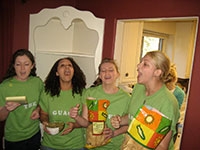 This past Superbowl Sunday I attended Guac Bowl X. Once again the competition was fierce with dozens of eclectic guacamole entries. My friend Tim won two trophies for his entry of “The Guacapellas”.

While I have never entered the competition myself, I have been going since the beginning. I even tallied up the votes for the first one. The only Guac Bowl that I missed was when I was following Jeff Tweedy up and down the West Coast in 2006. That just happened to be the year the Seattle Seahawks, the team I grew up watching, made it to the Super Bowl. Fortunately I was able to watch the game with some great friends and fellow Seahawk fans up in Portland, OR. Unfortunately they lost to the Steelers. It’s so strange that Los Angeles still does not have an NFL team. For the most part it seems that people here follow either the Raiders or the Chargers as their local team.

Visit www.guacbowl.com for more info on the greatest and most celebrated guacamole competition/SuperBowl party in the world.