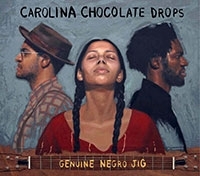 Nonesuch Records is set to release the label debut of North Carolina-based string band the Carolina Chocolate Drops on February 16. Produced by critically acclaimed recording artist and songwriter Joe Henry (Allen Toussaint, Elvis Costello, Solomon Burke), Genuine Negro Jig features string band interpretations of Blu Cantrell’s beat-box driven R&B single “Hit ‘Em Up Style” and Tom Waits’ “Trampled Rose,” as well as a pair of original compositions, alongside traditional tracks such as “Cornbread and Butterbeans” and “Trouble in Your Mind.” It is the band’s second record; their 2007 release, Dona Got a Ramblin’ Mind, was praised by Paste for “bravely and expertly reclaiming the string band tradition for modern African-American culture,” while NPR’s Weekend Edition calls the band “the hottest thing to hit the old-time music community in decades.” The band is touring in support of the album’s release.

All tracks are FCC Clean.