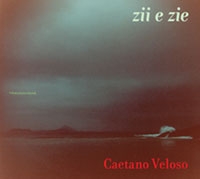 Hopefully you’ve had the chance to check out zii e zie, the new album fromCaetano Veloso that is going for adds this week. The Brazilian legend’s 41st album, released last year in South America and Europe, has already earned him a Latin Grammy for 2009 Best Singer-Songwriter album; Nonesuch releases the record in the United States this week. The samba-inspired album’s title is an Italian phrase for “uncles and aunts” that the singer/songwriter liked for the way it looks and sounds, and selected “because of the freedom of the mysterious choice.”