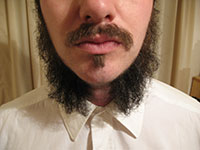 Hope you all had a good weekend. The Bell Gardens show on Friday night was fantastic. It was nice to see a lot of friendly faces in the audience as it was theRadar Bros. record release party. I’m looking forward to seeing Bell Gardens again this Saturday when they celebrate their upcoming debut release, Hangups Need Company . I spent most of the weekend resting and recovering from a bit of a fever and SXSW. It was nice to watch some of the NCAA Tournament in bed on my laptop. Yesterday felt like the first day of summer. It reached 85 degrees and I went to my first BBQ of the year. I decided that it was also time to shave off the beard that I have been growing since November 1st. Here’s a photo taken about halfway through the trimming.