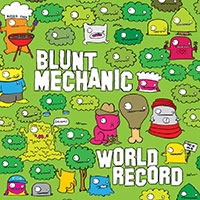 After releasing eight albums, six singles and five splits over the past 15 years asKind of Like Spitting, frontman Ben Barnett has retired the moniker and is set to release the debut full-length from his new band, Blunt Mechanic. Recorded on eight-track cassette, World Record is chock full of high energy riffs and hooks, showcasing the best songs, lyrics, and guitar playing we’ve heard from Mr. Barnett. Enjoy!