Host The Dead Weather Live Event On Your Site Tomorrow 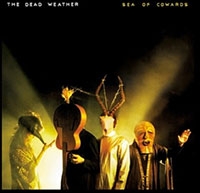 Dead Weather fans can tune into “Screaming Vinyl Live,” a 24 hour listening party for Sea of Cowards tomorrow at 10 a.m. PST. The new album is out May 10th but this is the first place to hear it in its entirety.

Embeddable players located on the A man A plan A canal website as well as the Third Man Records and The Dead Weather websites will be playing the new album on vinyl via a live camera and audio stream tomorrow from locations in both Nashville and Los Angeles and will feature surprise guest DJs. By copying the embed code here you can participate, too. This is a great opportunity for you to get some new content up on your website.

Also, on Monday, May 3rd, MySpace will be live streaming The Dead Weather performing their latest release,Sea of Cowards in its entirety. The band will perform the album front to back in the live room at the Third Man Records building in downtown Nashville, the same space in which they played their very first show in March 2009. This exclusive live performance will begin streaming at 3 p.m. PST on MySpace Music as well as the band’s Myspace page.