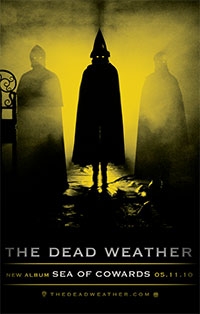 We hope you’re enjoying Sea of Cowards as much as we are.

Here’s what some others are saying about the album:

“As the album progresses, the band keeps the pummeling drive of their past work but ups the ante by throwing in some new sonic reference points. Jack White and the Dead Weather always sound like they have something up their collective sleeve. Thank God (and the Devil) they do.” -PopMatters

“It’s unhinged classic-rock explosiveness that sounds like it could be the result of a few vicious jam sessions– the rumblings of scuzz-rock lifers given a chance to air out all their purest expressions of ire. And when a chorus does emerge from the swampy ether, as on the ferocious first single “Die By the Drop“, it cuts deep.” -Pitchfork