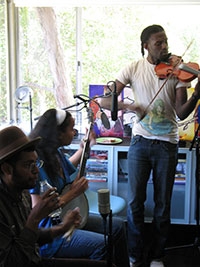 On Tuesday, the AmApAc office took a field trip to Laurel Canyon to see Carolina Chocolate Drops play an acoustic set as part of Go Music’s Mimosa Music series.  The gang enjoyed bagels, delicious Carmela ice cream (they even had a Carolina Chocolate Drops flavor just for the show), mimosas, and of course, a great set by the Carolina Chocolate Drops.  Violinist Justin Robinson forgot his jug, so the band improvised, using a Diet Snapple bottle.  The intimate crowd couldn’t help but tap their feet and clap their hands along with this incredibly talented string trio.  Thanks to Gary Calamar, his wife, and his team for hosting such a lovely midday concert.  Thanks also to Julie Muncy of Warner Bros. for organizing.

About Gary and Go Music:

Gary Calamar, president of Go Music, is a Grammy-nominated producer and music supervisor for his work on HBO’s “Six Feet Under.” He is currently overseeing the music on some of the most acclaimed and popular shows on television: “True Blood” (HBO), “House” (Fox), and “Dexter” (Showtime). Gary has also chosen the songs for the films “Varsity Blues,” for which he received a gold record, “Slums Of Beverly Hills” and the forthcoming release “I Love You Philip Morris”. Gary hosts a hit radio show every Sunday night on public radio powerhouse KCRW in Santa Monica. Gary’s unique brand of “adventurous pop music both timely and timeless” has been a favorite of listeners for over a decade. Gary’s book, Record Store Days (with Phil Gallo) about the rise and fall of The Record Store was released on Record Store Day, April 2010 from Sterling Publishing.