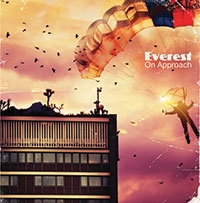 Many of you have already found out why the Illinois Entertainer describes Everest’s new album, On Approach, as “… an instant classic on the first listen…”  Now’s your chance to see them on tour with Minus the Bear (dates below).  Brad from Radio Free Silver Lake wrote about the band’s recent in-store appearance at Amoeba Records in Hollywood, saying that he became “emotionally involved” and that “…Everest was playing with a ferocity I hadn’t seen from them before. It was like fire and brimstone, and it was glorious.”

In May, the band stopped by WNRN in Charlottesville, VA to perform the lead track “Let Go.”  Check it out here and let us know if you’d like to schedule a similar performance at your station.