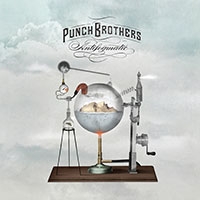 The new Punch Brothers album, Antifogmatic, has already generated a lot of buzz and won over fans, but now there’s another reason to get on board: The Huffington Post’s Brian Ross thinks they just might be the next Beatles.  In a review of the quintet’s performance at the Interlochen Center of the Arts on July 17, Ross says, “There are bands and musicians that redefine a genre of musicfor the ages,” he writes. “The Beatles in rock. Parker, Monk, Coltrane and Gillespie in Jazz. Tonight I witnessed that evolution in Bluegrass: The Punch Brothers featuring Chris Thile … [T]hey are to Bluegrass what Yuri Gagarin and John Glenn were to manned space flight.”  You can read the full article here.

NPR will be covering the band’s performance at the Newport Folk Festival this weekend as well as featuring them on the popular show, Weekend Edition.  Tune in to this site for the performance.