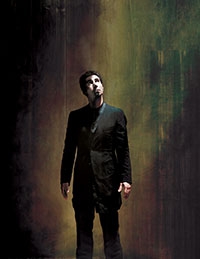 With System of a Down on indefinite hiatus, frontman Serj Tankian is set to release yet another solo album, Imperfect Harmonies.

If you haven’t already received the new Serj Tankian single, you can look forward to downloading “Left of Center” this Wednesday.

Serj Tankian’s album, Imperfect Harmonies, will be available in stores and on iTunes this September. In describing the record, Serj says, “...Imperfect Harmonies could be classified as rock because it is punchy with many peaks throughout, but the instrumentation is somewhat different. Though there are live drums, bass, and some guitars, the driving aspects are electronic andorchestral. It’s quite unique in its sound palette. This is, in essence, music that has sat in the vat and matured to a ripe sensation and is now ready to serve.”

Serj kicks off his North American Tour on September 12th. Check out the dates here!