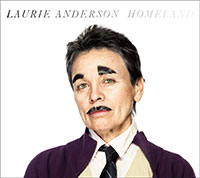 Laurie Anderson’s Homeland, her first album in almost a decade, is being hailed as one of this years best by critics worldwide with the Village Voice calling it an “engrossing swirl of avant-garde electro-pop” and PopMatters saying it’s “one of the most riveting and poignant accounts of post-9/11 American pop music has offered to date”.

This month, Laurie Anderson spoke with Pitchfork’s Stephen Deusner forAmerican Noise to talk about the conception of this amazing album.  You can read it at AmericanNoise.com

Also make sure to check out our On Tour page for dates for her upcoming tour.