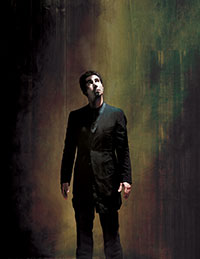 With “Imperfect Harmonies“, Serj Tankian set out to create a whole new sound. “When I first started, I called it electro orchestral jazz-rock or something,” he told Billboard Magazine in an interview. But when you listen to the lead single “Left of Center” it’s clear that what you are listening to is definitely Serj Tankian, definitely Rock. What isn’t lost on this first single is the political message, something Serj is well known for from his System of a Down days. Don’t expect the whole album to lean this way. “Everything is a bit more philosophical and…more abstract.”

Imperfect Harmonies is due out September 21st via Reprise and Serj Tankian’s own Serjical Strike Records.