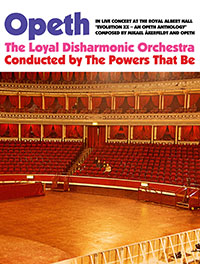 A man A plan A canal is proud to present you an exclusive film screening opportunity with Opeth in Live Concert At The Royal Albert Hall. As part of the band’s ongoing 20th anniversary celebration, this Roadrunner Records release features two amazing sets captured at the London’s famed Royal Albert Hall: their now classic Blackwater Park album performed in it’s entirety and a collection of chronologically arranged hits spanning their 20 year career. The DVD also features exclusive interviews and a behind-the-scenes documentary chronicling this iconic progressive metal band as they tour the world.

Opeth in Live Concert at The Royal Albert Hall is available to you for screenings through November. Don’t miss this opportunity to screen this incredible, once-in-a-lifetime performance which stands as a fierce testament to Opeth’s continued success.

Contact us if you’d like to set up a screening Opeth in Live Concert at The Royal Albert Hall!