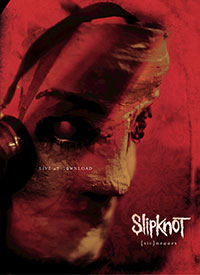 A man A plan A canal is proud to present you an exclusive film screening opportunity with Slipknot: (sic)nesses. Consisting of footage Filmed at the 2009Download Festival with 30 different cameras amidst a crowd of 80,000 people, Slipknot: (sic)nesses puts you in the front row for one of the most intense concert experiences you’ll ever witness. Crank up the volume and rock out to performances of some of Slipknot’s biggest tracks including “Duality”, “Left Behind”, and “Spit it Out”. In addition, this screening offers you the chance to see a version of this electrifying film that won’t be available anywhere else.

Click Here to view the frenetic trailer and get your first glimpse of this film.

Slipknot: (sic)nesses is available to you for screening beginning October 25th, 2010, just in time for Halloween. If you’d like to put on a killer Halloween week or Halloween night event, this concert film is the perfect hook to get a massive crowd out and rocking to some amazing Metal tunes from this legendary band.