All About The Autumn Defense 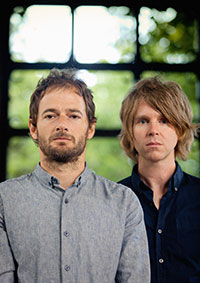 Founding Wilco member John Stirratt and multi-instrumentalist/current member Pat Sansone bring the sounds of a California summer to the fall when they release Once Around 11/2 on Yep Roc.

Much more than a side-project, The Autumn Defense is a fully realized, decade-long creative outlet for Stirratt and Sansone, elucidating a fresh set of songwriting goals and avenues of artistic expression. Once Around finds the band with a renewed vision and focus. Extensive touring plans are in the works which will allow the new material to flower in a way previous projects weren’t able to enjoy.

By day John Stirratt and Patrick Sansone sell thousands of albums and tour the world as members of indie juggernaut Wilco, while lending their writing, playing and producing abilities to dozens of high-profile recordings. But by night these renowned pros are able to sit down, relax and create something special that comes straight from the heart of why they pursued music as a career – and that’s the Autumn Defense.

After releasing 2007’s The Autumn Defense on their own Broadmoor label, Stirratt and Sansone have teamed up with North Carolina’s Yep Roc Records to release their latest full-length effort, Once Around. For the past nine years, this pair of Southerners-turned-Chicagoans has quietly been nurturing the reverent, classic pop of the Autumn Defense. Though the outset of the band saw Stirratt handling the bulk of the songwriting while Sansone lent his talents to production, the duo has steadily evolved into a partnership in both respects. From 2000’s debut effort The Green Hour to the critically lauded, salt-of-the-earth folk rock of 2003’s Circles, the Autumn Defense developed its late afternoon kickback sound like a fine wine develops and deepens – with time. Once Around is a formidable tapestry of thoughtful, intricate sunshine wrapped around a core of timeless, experienced songwriting. It’s the kind of record that needed to be made, for the audience but also for the artists.