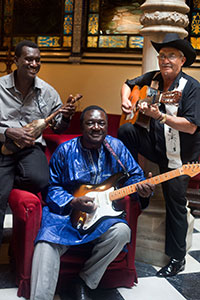 In 1996, a group of Mali’s finest musicians were due to fly into Havana for a speculative collaboration with some of Cuba’s most brilliant singers and instrumentalists. For reasons that have never been made clear, the Malians never arrived. A very different album was recorded: Buena Vista Social Club. The rest, as they say, is multi-million selling history.

But what about that original album? What riches might have been revealed in the interaction of virtuosi from one of Africa’s most musically rich territories, and from Cuba whose music has origins in Africa, and has been hugely influential on the mother continent?

AfroCubism offers the opportunity to find out.

“It was as though the musicians had been holding back their ideas and energy for that moment,” says Gold, who produced the album, with the great Buena Vista engineer Jerry Boys at his side. “After we’d waited so long, it all came together remarkably easily and spontaneously. The group had never played together before but the music just poured out and it continued to flow over the next few days.” Seventeen songs were recorded in five days, with all the musicians playing together “live” in one large room. A second session was convened some months later and produced a further nine songs.