An Introduction to CAN 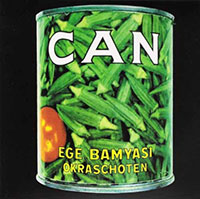 The Norwegian Wood soundtrack features three tracks by the German experimental group CAN. Pulling from electronic, world, jazz, and minimialist and psychedelic styles, CAN created a sound all of their own that went on to influence genres ranging from punk to ambient to hip-hop. CAN member Irmin Schmidt became inspired to start CAN after spending time among avant-garde composers like Steve Reich and Terry Riley then being introduced to the sound of the Velvet Underground. In 1971, the group released the classic double albumTago Mago which has become one of the most highly acclaimed albums of all-time. Artists like Brian Eno, Sex Pistols, Talking Heads, David Bowie, Spoon , Joy Division, The Flaming Lips, Radiohead and many more have all cited CAN as musical influences.