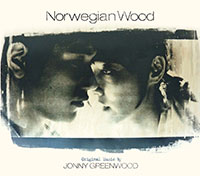 Jonny Greenwood’s new film composition is for the coming-of-age filmNorwegian Wood. Based on the best-selling novel of the same name by Haruki Murakami, the score comes to us four years after Greenwood’s Grammy nominated work for Paul Thomas Anderson’s There Will Be Blood. For this piece, Greenwood had to write most of the music in hotel rooms while on tour with Radiohead. Conducted by Robert Ziegler, the score offers everything from melancholy progressions, stark strings, moments of dissonance to traces of classical guitar. Featured on the soundtrack are also three tracks from the classic krautrock group, CAN.