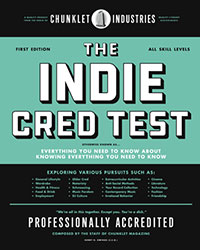 Happy Opening Day! I’ll be headed up to Chavez Ravine this evening to see the Dodgers take on the World Champion San Francisco Giants. It should be a great matchup with Kershaw and Lincecum pitching. Go baseball!

Yesterday I received Chunklet’s new Indie Cred Test. If you’ve never read Chunklet, they’re a Georgia based magazine that’s been poking fun of the underground music scene since 1993. Their most recent issue features articles from Paul F. Tompkins and Zach Galifianakis. The Indie Cred Test was written and published by Chunklet, illustrated by Jesse LeDoux and serves as a satirical standardized test to see how legit and lame you are – I’ll let you know how I do!