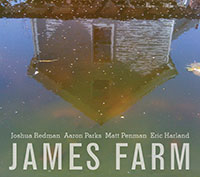 This week we have some new music for your listening pleasure. James Farm‘s self titled debut album is here, featuring a collaborative band of jazz virtuosos such as saxophonist Joshua Redman, pianist Aaron Parks, bassist Matt Penman, and drummer Eric Harland. “The band uses traditional acoustic jazz quartet instrumentation for its song-based approach to jazz and incorporates the members’ myriad influences: rock, soul, folk, classical, and electronica, among many others.” This quartet has already received critical acclaim since its debut at the 2009 Montreal Jazz Festival, where they got great reviews.