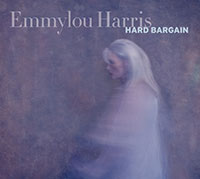 The singer-songwritter from Alabama has just released a new album this week via Nonesuch Records. Emmlyou Harris‘ Hard Bargain follows her acclaimed 2008 release, All I Intended to Be. This new album, which comprises 11 new songs by Harris as well as two covers, frames her thoughts in folk, country and rock. Hard Bargain was produced by Jay Joyce (Cage the Elephant, Patty Griffin) who adds modern, quirky touches to simple arrangements that bringHarris‘ lilting voice front and center. Emmylou Harris has worked as a backing vocalist and as a duet partner with numerous acclaimed artists such as Gram Parsons, Bob Dylan, Elvis Costello, Conor Oberst, Warren Zevon, The Bandand Dolly Parton.