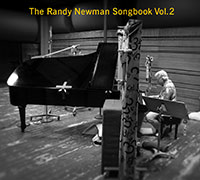 Today we’re digitally servicing The Randy Newman Songbook Vol. 2. These solo piano and vocal recordings take a fresh look at some of the Grammy, Oscar, and Emmy winner’s most celebrated songs. This is the follow up to the songwriter’s acclaimed first songbook which was also co-produced by Mitchell Froom (Elvis Costello, Crowded House, American Music Club). On this release Newman revisits songs from the 1968 album Randy Newman (“Cowboys”)through his most recent, 2008’s Harps and Angels (“Laugh and Be Happy” and“Losing You”).