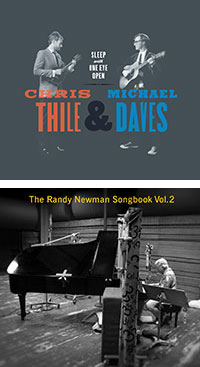 This week we have two great albums going for adds. The first one is Sleep with One Eye Open, the debut collaboration from mandolin-virtuoso Chris Thile and guitar maven Michael Daves. Recorded at Jack White‘s Third Man studio in Nashville, TN this album is a collection of 16 traditional bluegrass tunes by legends like The Monroe Brothers and Jimmy Martin.

The second add is The Randy Newman Songbook Vol. 2. by Randy Newman. This digital only servicing is the follow up to the songwriter’s acclaimed first songbook. In this release Newman revisits songs from the 1968 album Randy Newman (“Cowboys”) through his most recent, 2008’s Harps and Angels (“Laugh and Be Happy” and “Losing You”).