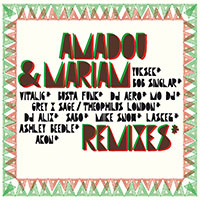 This week we have a digital-only servicing from the duo Amadou & Mariam. “The blind couple from Mali” have released a 13-track digital album of remixes via Nonesuch Records. The Remixes collection features favorite singles from their best-selling Because/Nonesuch albums Welcome to Mali and Dimanche à Bamako, including 1999’s “Je Pense à Toi” (the track that first brought the duo toManu Chao’s attention) along with several new versions, and some previously unreleased mixes. The album includes remixes by Miike Snow, Bob Sinclair,Vitalic among others – which Pitchfork calls a “wonderfully random” group of collaborators.