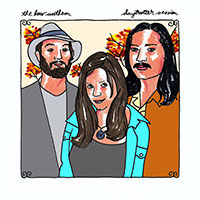 This week AmApAc is digitally servicing new music from The Low Anthem. These tracks were taken from their recent Daytrotter Session and were just released on a limited edition split 12″ with Iron and Wine. The two bands have also been touring together extensively. Sam Beam from Iron and Wine called The Low Anthem’s’ live show “beautiful” & “fun to watch,” as he recounted a show in which The Low Anthem ‘s Ben Knox Miller “started doing his feedback loop with his cell phone and the whole crowd”. On this release, The Low Anthem offer live performances of three songs from their latest Nonesuch full-length, Smart Flesh, which Daytrotter proclaimed is “without question a contender for album of the year.” This record has very limited physical copiesbut you can download it now for your station.