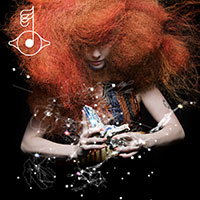 Björk has just released another single from her upcoming album,Biophilia. Described as “the album’s theme song,” “Cosmogony” (pronounce kahz-MAH-juh-nee) invites you to “fly through a three-dimensional galaxy.” During the journey, we suggest you turn up your subwoofer.

The free Biophilia App has also been released today on iTunes. It serves as a platform for each of the album’s ten songs to evolve into interactive audiovisual experiences. Each song will feature its own game, a musical animation of the song, an animated score, and an academic essay.

The full album will be released on September 27 and is available for pre-orderhere.