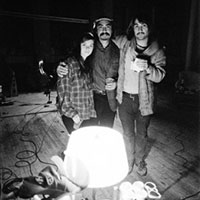 The Low Anthem has just announced a US headlining tour for September and October 2011 to support their latest album, Smart Flesh.

The album has received considerable praise this year, with the Los Angeles Times calling it “a gorgeous, inventively arranged set of reverb-rich root ballads” and Rolling Stone saying “it’s as if the Band stripped their prairie-goth majesty down to Tom Waits’ early barfly essentials.”

The band will also be reuniting with Iron and Wine on October 13 at Terminal 5 in New York City.

Pre-sale tickets (available here) come with a download for Working Title 7″ – two Smart Flesh outtakes titled “The Snake and the Lightning Rod” and “Glitter.” The outtakes are also available for streaming on Soundcloud.