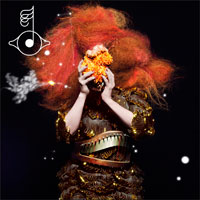 This week we have two new remixes of Björk’s “Crystalline”, done by Omar Souleyman and Matthew Herbert.

Omar Souleyman, a Syrian musician whose fanbase includes Caribou, Ariel Pink and John Maus, has caught the attention of critics around the world.Sublime Frequencies has recently made his recordings available in North America. Check out an awesome video of Omar in action, re-working “Crystalline”, here.

Matthew Herbert, a British musician and producer known for incorporating everyday objects such as hair, apples, sewers, and cereal into his music, achieved universal acclaim with his album, Scale, which Pitchfork called one of the best albums of 2006.