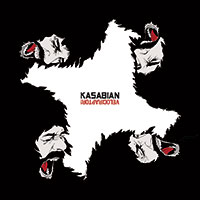 Hope you’re enjoying the new album from Kasabian, Velociraptor!. If the record does as well as their last release, West Ryder Pauper Lunatic Asylum, it’s sure to be one of the year’s biggest albums. On this album, the band references some of the UKs greatest bands from the Brit-pop & psychedelia of The Beatles to the gritty electronica of The Happy Mondays & Primal Scream. Velociraptor!was serviced to you digitally & physically last week, check it out for this week’s adds!