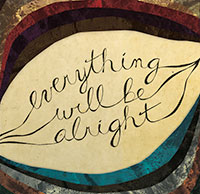 Today we bring you new music from Chilean-native, LA-based indie pop artistYael Meyer. She’s been writing and performing music since the age of 8 and at 19, released her Rolling Stone Chile Top 50 Album of the Year, Common Ground. Her use of melodica, glockenspiel, piano, accordian, ukelele, and percussion make for a light, indie pop feel that’s equal parts Feist, Chairlift & Juana Molina. On the single “Fire,” Yael lays coy vocals over a stomping latin rhythm & bouncing keyboard. This is the debut single off her upcoming album, Everything Will Be Alright, which will be serviced to you in November.