We Are Augustines Update 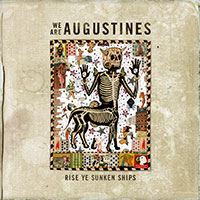 If you’re just returning from summer break, then you’re probably just getting into the debut release from We Are Augustines called Rise Ye Sunken Ships. The record has been strong on the CMJ charts for quite a few weeks now but still continues to find new listeners with KXZY, WBIM, WSUW & WHRW recently debuting it. Here’s what people are saying about the record:

“Not many people have the guts or strength to put it all out there…In a world where products and people are manufactured to fit our needs and desires ‘Transparency,’ the buzzword of the moment is often one that holds little weight.We Are Augustines reveals the true meaning of what feels like the most over-used and under-investigated buzzword of 2011.” – Filter Magazine

“Rise Ye Sunken Ships is an album of desperation, hope and frantic pleas to a loved-and-lost brother. All those emotions are adeptly channeled through the compelling and aggresive indie rock.” – Paste Magazine