Catching up with Graham 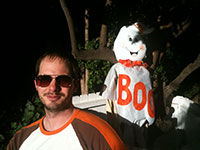 I’ve seen so much good music in the past month. I saw a bunch of great shows out in NYC last month for the CMJ Music Marathon, but I’ve kept it going since I’ve been back. My friend Andy took me the 78th Annual Los Angeles Bach Festival to see a phenomenal performance of Bach’s Mass in B Minor. I’ve also been lucky to see great shows from Gold Panda, Zola Jesus, tUnE-YarDs, and Cut Chemist. In addition, I’ve been getting back into working on some of my own music. I’ve been writing lyrics and I’m hoping to finish up some new songs when I go into the studio later this week. Hopefully I’ll be able to get out another album in the first half of 2012.