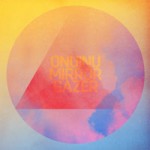 Onuinu’s (pronounced “on you in you”) Dorian Duvall is no stranger to music. The Cleveland-bred, Portland-based artist spent his childhood in church pews listening to his mother sing and play piano, and watching his grandparents perform, who in the 50’s toured the country as a honky-tonk gospel act. It’s no surprise then that Onuinu’s transition into the world of music making was seamless, “a lot of the people I was hanging out with were getting into house music and making dance beats. It was really easy to pick up on that and start making my own.” After recording a few songs to be released exclusively on cassette tape by the Portland based label Apes Tapes, Onuinu now returns with his debut album Mirror Gazer, set to be released September 11th.

Drawing inspiration from everything from old school hip hop to even some heavy metal, the resulting tracks are an interesting mix of laid back sound perfect for summer days. Onuinu’s beats act as a backbone to subsequent layers of gauzy melodies, teeming synths, and swirling sounds. For now you can listen to the track “Ice Palace” and get your fill by reading an article by Willamette Week, which recently named Onuinu one of the Best New Bands of 2012.