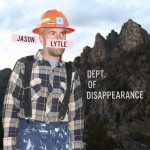 The title of former Grandaddy frontman Jason Lytle‘s latest solo effort, Dept. of Disappearance seems ironic, as he doesn’t seem to be going anywhere anytime soon. In fact, he’s headed in an exciting direction – a direction that sometimes feels like an elusive journey down a Montana road into a beautiful and spooky sunset, filled with dark reflections and sweeping sonic beauty. Long-time fans and first-time listeners alike will certainly appreciate Lytle‘s evocative and film-like album, which we present to you today in the form of a digital download.

While you’ve already heard the melodic and bittersweet anthem, “Get Up and Go”, it is only a sampling of an emblematic release of what Lytle does best: writing lyrics like short stories and encapsulating narratives in songs that tie together into a beautifully hypnotic whole. Disappearance is no exception, as the record plays like an emotionally resonant soundtrack for a non-existent cinematic masterpiece. Affirmably, Lytle admits that the devastating track “Your Final Setting Sun” had a “film playing along in [his] head as [he] was writing it.” In “Last Problem of the Alps” a piano waltz conjures the images of a “violent and howling blizzard on a dark and rocky mountain top in sub-zero temps,” accompanied by the faint sounds of birds chirping. You’ll have to listen for yourself, close your eyes and get lost in the soundscapes Lytle creates.