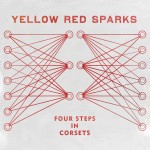 The new EP by Yellow Red Sparks arrives a week before the band makes their CMJ Music Marathon debut. The group’s brand of folk rock ranges from raucous and anthemic to swaying and confessional — resulting in something you’d expect to find at a late-night, whiskey fueled, barnyard party — exactly at the moment where the night reaches its peak and the imminence of dawn settles in. Their new Four Steps in Corsets EP begins with the clacking of drum rims and a stomp that then bursts into a collective scream of “Why would you mess with my head!” Singer Joshua Hanson‘s state of distress forms the song’s tension that makes for a bracing listen. On “Buy Me Honey”, the group takes a waltzy glide and reaches deeper to their roots and brings to light their rich harmonies and old-film-style symphonic arrangements. The four-track EP was produced by Ted Hutt (Gaslight Anthem, Flogging Molly) and mastered by multi-Grammy award winner, Brian Lucey (The Shins, Sigur Rós, The Black Keys). After CMJ, the group will be opening for ZZ Ward on the west coast. Get to know the group’s cinematic and pastoral soundscapes before heading out to New York.