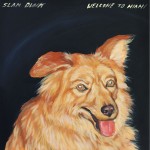 Vancouver’s own Slam Dunk are releasing their sophomore record in November called Welcome to Miami. The band attempts to incorporate everything they adored in a classic pop hook while invoking something more brash and chaotic. The band’s raucous live shows and relentless touring have led them to supporting such bands as Les Savy Fav, Wavves, Japandroids, and F*cked Up. Lead single “Dying Breed” is the perfect sample of Slam Dunk‘s impulsion. The song starts with a guitar riff you’d find on a Ponytail record and is interrupted by a scream that leads to crashing movements of intensity. “Fantasy” is Bruce Springsteen and the E-Street Band on speed and concludes the 2-song sampler available for download below. The band is playing CMJ and will be introducing these songs to able American bodies next week.