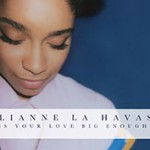 Lianne La Havas‘ debut album Is Your Love Big Enough? continues to win music fans over. After making her television debut on Late Late Show with Craig Ferguson, Carson Daly invited her to Last Call where she shared the story behind the first song she ever wrote and album favorite “Forget”. Watch the interview and performance here. Her tour of the late night talk shows will resume in November when she stops by Late Show with David Letterman and Conan while on a 3-show jaunt through Virginia and California.