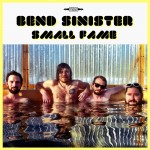 Last week you received the latest album from Vancouver bred Bend Sinister, and next week the record will be going for adds. Make sure to have a listen to the Small Fame. As Exclaim comments, the energy on this record “rarely wavers over the course of these 44 minutes and nearly every song is marked by theatrical crescendos and frontman Dan Moxon‘s exuberant singing.” Indie Fuzz says their songs “make you want to dance and sing with a big smile on your face”. The band has been playing at many of the big festivals in Canada, including POP Montreal, Olio Festival and Live at Squamish. On top of that they also have opened for Metric, Hot Hot Heat, and Minus the Bear.

Starting Nov. 4th, Bend Sinister will be headed down the west coast on their month-long U.S. tour with The Royalty. They started a string of post-CMJ Canadian dates last week so check out the list & make the record an add 11/5: