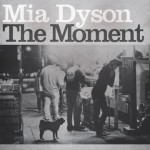 Mia Dyson’s The Moment has been in the works for a lifetime. For the past decade, Dyson has been working diligently – cutting three records & performing across her native continent of Australia which has resulted in four ARIA nominations (Australian equivalent to Grammy’s), one ARIA award, national acclaim, and tours with such legends as Eric Clapton and Stevie Nicks. Still, what Dyson has dreamed of the most is to tour America and make a lasting record. But with her professional and personal life crumbling around her, that sense of urgency had reached a breaking point, which ultimately culminated in The Moment. The opening track “When the Moment Comes” embodies that urgency, both thematically and musically. A driving kick drum and pounding piano lifts us off with Dyson repeating, “You will know what to do when the moment comes” as if it were a mantra. “Pistol” chronicles the heartbreak of separating from her longtime-partner. The track’s swaying verses subside to an explosion of emotion that is captured by Dyson’s powerful vocals and wall of sound production. The recording process for The Moment brought her to the United States, a land foreign to her, at a time when Dyson was most vulnerable. “You are dancing on the edge of the world”, Dyson recognizes on track “Dancing On the Edge”, as the music crescendos into a gleaming organ and ringing chords. Her new album has already captured the hearts of new fans and connected her more deeply with her existing supporters in Australia, now it’s time to join Mia Dyson in The Moment.