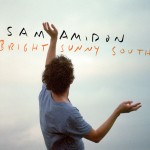 Nonesuch Records releases Sam Amidon’s label debut, Bright Sunny South, this spring. Amidon describes Bright Sunny South as a “a lonesome record” and a return to the more spare sound of his 2007 self-recorded debut, But This Chicken Proved Falsehearted: “There was an atmospheric quality to my last two records; those albums are like a garden of sounds,” says Amidon, “but this one is more of a journey, a winding path. The band comes rushing in and then they disappear. It comes from more of a darker, internal space.” The Vermont-born and raised, London-based Amidon is known for his reworking of traditional melodies into a new form. The single, “My Old Friend”, is a nod to Amidon‘s American roots with “sun-warmed…acoustic guitar, capo’d high to give it a twinkling quality, edged by small cirrus clouds of electric lead”. Pitchfork premiered the track in February; download it below along with two additional songs off his forthcoming record.