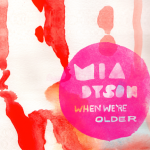 Mia Dyson is a singer, guitarist and songwriter from Victoria, Australia. She’s released 4 critically acclaimed albums, all of which have been nominated or won ARIA Awards, and has performed all over the world at prestigious festivals and venues, sharing the stage with legendary musicians. “When We’re Older,” is the first single off Dyson‘s highly anticipated fifth album, due Summer of 2014. Dyson learned to let go of things she couldn’t control on the album stating, “I do not have a record contract that says I have to make a record. I do it because I’m compelled to. Because control is an illusion. I make records to put it down finally and to release that control. To stop second-guessing. It’s taken five albums to let go and step into the dark. I’m following songs where they lead me now. It’s unpredictable, where they’ll go. As the process unfolds the songs reveal themselves. I’ve learned to trust the process, trust the skills I’ve built up, and the people I’ve chosen to surround myself with.” The new single just premiered on Billboard, so read more and listen to it here!