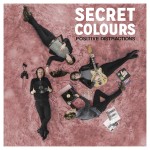 On Positive Distractions, Secret Colours craft a sound that reaches far beyond the industrial city limits of their hometown of Chicago, IL. Recorded at Dandy Sounds Studio in Dripping Springs, TX by Producer Dan Duszynski, they have taken a direction with their new album by relying much more on the live spirit that swells from the stage. Songs like “Into You” and “I Know What You Want” are an homage to their Britpop influences while opening song “City Slicker” has all the cool of ‘60s psych-pop with an attitude of disgust unseen since mid-’70s London. Follow-up track “It Can’t Be Simple” takes on a reggae-inspired rhythm section not far from The Clash, complete with infectious organ. Secret Colours is eager to celebrate the much leaner four-piece collective, vocalist/guitarist/songwriter Tommy Evans and drummer Justin Frederick rounded out by newcomers Eric Hehr (bass) and Mike Novak (guitar) with the release of Positive Distractions. Since the band’s formation in 2010, Secret Colours have performed with the likes of: Warpaint, The Raveonettes, Night Beats, The Warlocks, Spindrift and more.