New Music from The Jigsaw Seen 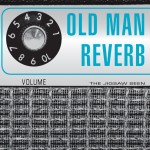 Like Jigsaw Seen‘s previous albums, Old Man Reverb features elaborate packaging designed by the band’s guitarist, Jonathan Lea. The new album was mastered by engineer Sean Magee, who won a Grammy in 2011 for his work on The Beatles’ “Original Studio Recordings.” Magee mastered the album at the legendary Abbey Road Studios in London. The opening track, “Let There Be Reverb,” reels the listener in with an addictive garage-rock riff. Catchy and upbeat, the song explores the art of producing music while striving for balance between creativity and the corporate nature of the industry. From packaging and recording to the music itself, Old Man Reverb is another impeccable and timeless release from Jigsaw Seen.

“These men are independently talented and use the past as inspiration for what they’re producing in the present: high caliber sound through ingenious creativity and endless experimentation.” – REBEAT

“What The Jigsaw Seen delivers on all of their albums is some of the best rock music ever made. Their music is a master class on song construction, style and technique.” – RUST

RIYL: The Zombies, The Kinks, The Fresh & Onlys, Guided by Voices, XTC, The Brian Jonestown Massacre