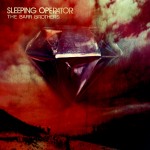 “What would an ocean be without a monster lurking in the dark? It would be like sleep without dreams.”
-Werner Herzog

The Barr Brothers are poised to release the follow-up to their self-titled debut album, Sleeping Operator. The release is as organic as the way in which the band formed. The Barr Brothers relocated from Boston to Montreal in 2005. In his first apartment, Brad Barr shared an adjoining wall with Sarah Page whose harp melodies would seep through the wall and into his music. From this nebulous relationship, a friendship developed and the brothers and Sarah recruited multi-instrumentalist Andres Vial to record their heralded debut record The Barr Brothers; “…a dusty journal of hushed Americana, West African grooves, and voyeuristic lyrics, rich with artifacts…”

On Sleeping Operator, the band continues to push the envelope, extending genres to create a relentlessly powerful and fresh sound. They record everything live, including vocals. Raw, off-kilter blues jam “Half Crazy” embodies the immense creative energy of these sessions: The polyrhythms of Mali/Moroccan desert; the expansiveness of the Icelandic landscape; the sweat and electricity of the Chicago and Mississippi Delta blues; the isolation of a large, wooden room in Montreal.

“A stone cold groove with a menacing edge, The Barr Brothers add the plummeting temperatures of Montreal to the Americana stew.“
– Clash Music (UK)

*Opening for The War On Drugs beginning 10/09