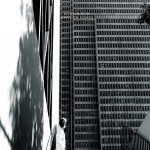 “I walked out of the back end of my major label run and the first 9 years in Howlin Rain with no band, no label, no foreseeable immediate move forward and a figurative suitcase full of songs, my talent, invigorated by having nothing else to lose, exhausted by the bullshit and grind of the music business, this musical life, and all it’s absolute bullshit and fucked tests, cynical but not bitter. I still wanted to make more records. I wanted to track the journey from nothingness back to creation in musical form in a set of three albums and rock bottom was the perfect place to start from. There’s nothing to fake down here! It’s a dark and beautiful and pure cave to create something truthful from. The first album in the trilogy is Mansion Songs.”
– Ethan Miller of Howlin Rain

Mansion Songs is a living, breathing, and thrillingly imperfect thing. It sweats, it bleeds, its skin is rough and calloused. The album embodies the “sound of despair in various forms,” from rhythmic tunes “Wild Bush” and “Big Red Moon” to the lingering vocals found on “Restless.” With such variety of sounds, Mansion Songs shows Miller at his most vulnerable & raw. “Sometimes we regain control over ourselves and our lives by allowing our psyche to give in and accept chaos and let it blow us to the place it must for us to begin to have clear emotional sight again”.