Jeremy and the Harlequins Going For Adds 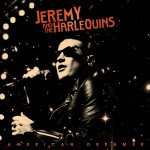 Jeremy and the Harlequins offer direct, straightforward rock ‘n’ roll on American Dreamer. With roots firmly grounded in the Fifties and Sixties, the band relied solely on their own instruments and voices to create the authentic, raw magic of American Dreamer, which was recorded in analog during a furious two-day session at Detroit’s legendary Tempermill Studios (the White Stripes, Loretta Lynn). Though the band cites influence from classic artists like Buddy Holly, their modern take will remind some listeners of recent releases by Arctic Monkeys or Hanni El Khatib.

The album showcases singer Jeremy Fury’s vocal dexterity and the band’s mastery of different sonic landscapes. The opening track, “Trip into the Light,” sets the high-energy and vividly nostalgic tone of the rest of the album. “Right Out of Love” is a doo-wop infused lullaby, with comforting vocals that contrast lyrics about falling out of love. Throughout the LP, Jeremy and the Harlequins show reverence for detail while taking listeners on an energetic and engaging journey through rock ‘n’ roll history.

“With some melancholy yet playful vibes reminiscent of both Elvis and Buddy Holly, the group of five stays true to their acoustic rock roots while mixing in their own definitive style. It’s not vintage—it’s retro.”
-Nylon