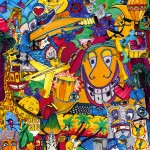 Los Angeles-based world-dance-pop act Fool’s Gold recently sat down with Sound Dessert to talk about their colorful and energetic summer album, “Flying Lessons.” The band talked about the inspiration behind their new album, falling in love at the Catacombs while touring, and their favorite Pantone color. Fool’s Gold also told the story behind the incredible album artwork – “We set up poster boards in the control room during the making of the album. We’d bust out the markers when the mood struck, and apparently it struck often,” says the band. The end product is a collage of various vivid drawings that match the album’s vibrant sound. Read the full interview with Fool’s Gold here.