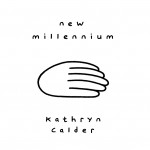 “Up until this point,” writes Stereogum here, “Kathryn Calder of the New Pornographers has consistently churned out mellow synth-pop under her solo moniker. Her newest song, ‘New Millennium,’ takes a bit of a different turn… If anything, its fiery attack skews too aggressive for the Pornos.” Elsewhere, Heartbreaking Bravery says the song is one of those that “blows the hinges off what we’ve come to expect from an artist based on their previous body of work.” That review compares Calder’s to White Reaper and La Sera, while also praising her third, self-titled solo album that was released earlier this year. Check that review out here.

Calder has released “New Millennium” to help build buzz for her upcoming tour, which begins Sunday. See her live at any of these dates, and listen to a stream of the track below: