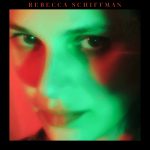 Rebecca Schiffman has spent the last three weeks on the CMJ Radio 200 – but that’s not the only place she’s been! She’s also been on TV sets, as she recorded a cover of the theme song for Adult Swim’s popular television show Squidbillies that was used during the opening credits of an episode this season. Enjoy her quirky electronic cover here.

As reported by Pitchfork, Schiffman’s cover is one of multiple Squidbillies covers solicited by the show for its current season. In addition to Schiffman, this year’s artists include Father John Misty, Kurt Vile, Sharon Van Etten, the B-52’s, and Jimmy Cliff. She recorded her version with the legendary Money Mark, who also produced her new self-titled LP. Watch a behind the scenes video from their recording session below.